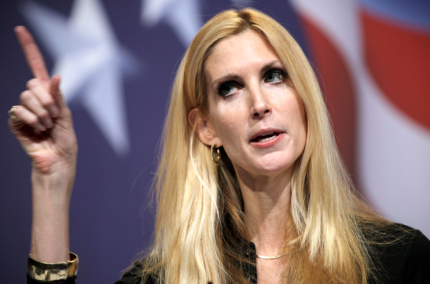 Recently irritated by a stance taken by Ann Coulter,  I searched the web to see if she and Hitch ever crossed paths. The occasion for my irritation was her appearance on TV last week where she defended Donald Trump’s campaign manager, who was arrested for assaulting a female reporter at a rally. I thought she bulldozed over both the weak host and a guest who was brought on to provide the opposing view. It was one of those times where I wished Hitchens was the opponent, as he would have, I imagined, really stuck it to her with a scathing argument. With a quick search I found that he had not only met Ms. Coulter, but had reviewed one of  her books, “Godless: The Church of Liberalism” for The Liberal. Hitchens did not disappoint with his review:

Reprinted from The Liberal

TRY sipping this single sentence and then rolling it around your tongue and palate for a while:

If Hitler hadn’t turned against their beloved Stalin, liberals would have stuck by him, too.

Well, I am being paid to parse and ponder that statement and I don’t understand it, either. Does it intend to say that liberals loved Hitler but drew the line at his invasion of the Soviet Union? Should it, rather, be interpreted as meaning that liberals were in love with Stalin but jumped ship when he was attacked by Hitler? It is remarkable to find so much intellectual and syntactical chaos in an assertion that contains no more than fifteen words.

But then, I have the distinct feeling that people do not buy Ann Coulter’s creed-screeds and speed-reads in order to enhance their knowledge of history or their command of syllogism. She has emerged as a persona because she has mastered the politics of resentment, and because she can combine the ideology of Human Events (the obscure ‘Joe McCarthy was right’ magazine) with the demand of the chat-show bookers for a tall blonde with a very rapid delivery on a wide range of subjects. The cover of this book – which follows the success of its forerunners Treason and Slander: titles that require little elucidation – shows her in a low-cut black dress with a prominent crucifix dangling over a modest cleavage. The needs of showbiz notwithstanding, I cannot fathom the reason for this slight come-hitherishness. Miss Coulter is not married and ought therefore, by her own loudly-proclaimed standards, to be a virgin and to remain so until further notice.

I used to know her slightly during the days when we both believed, for different reasons, that Bill Clinton was unfit to be President. I well remember her shock and anguish when Paula Jones, whose lawsuit had initiated the impeachment meltdown, posed in the buff for an inexpensive men’s magazine. I took the view that even a bad girl has the right not to be crudely importuned by her politician boss, but Miss Coulter seemed deeply and genuinely shocked: she had believed all along that Paula was a fragrant young thing, quite innocent of the vile nature of the male animal; and it is this innocence of her own, I think, for which she attempts to compensate by adopting a tough-guy (yes, I do mean to say ‘guy’) manner.

Here is another instance of the sheer incoherence that results from a mixture of feigned rage and low sarcasm:

If liberals are on Red Alert with one born-again Christian in the cabinet of a Christian president, imagine how they would react if there were five. Between 25 and 45 percent of the population calls itself “born-again” or “evangelical” Christian. Jews make up less than 2 per cent of the nation’s population, and yet Clinton had five in his cabinet. He appointed two to the Supreme Court. Now guess which administration is called a neoconservative conspiracy? Whether Jews or Christians, liberals are always on a witch hunt against people who appear to believe in God.

Again, and quite aside from its junk statistics (that space “between 25 and 45 per cent” appears to involve quite a margin of error) and its junk statistical comparisons (does Coulter really want me to name all the Jews who serve on President Bush’s foreign-policy team?), this passage seems to license the ultra-left and ultra-right innuendo that the terms ‘neoconservative’ and ‘Jew’ are interchangeable. The intellectual disgrace of this is self-evident, and so is its vulgar ignorance: say what you will about Leo Strauss, he did not even “appear” to believe in any deity. More noticeable, though, is the way that the abject confusion, with its resounding non sequitur of a concluding sentence, impels her to the negation of her own supposed “argument”. These are the pitfalls that are set by spite and by haste, and Coulter topples leggily into them every time.

Since her books always pull enough of a crowd to put them on the bestseller list, the editors and fact-checkers at her publishing house evidently go on vacation when the manuscripts float in. For all her show of biblical learning, she does not know the meaning of the word “shibboleth”, for example. She attacks those who seek “the removal of ‘under God’ from the Pledge of Allegiance”, when the case is that the Pledge should be restored to its original form, which did not include those two words. Are not conservatives supposed to manifest great respect for ‘original intent’? And then there’s the crass choice of words:

If Democrats ever dared speak coherently about what they believe, the American people would lynch them.

Leave aside the fact that most of what Coulter adduces is taken straight from the very mouths of Democrats who are coming right out with it, and notice the clumsy elision that interchanges “liberal”, “Democrat” and “Left”(and skip over the unironic use of the word “coherently”), the term to avoid here would have been “lynch”. Never to be employed flippantly, this expression has a real-time and real-life significance, which was felt very onerously in quite recent memory. Its disappearance, and the abolition of what went with it, is admittedly not due to “Democrats”, who ran Dixie as a private fief for far too long, but does redound very much to the credit of those American liberals and – even worse! – leftists who provided most of the energy of the Civil Rights movement. The umbrella group in this campaign was even called the ‘Southern Christian Leadership Conference’, not that this prevented many secularists and atheists from participating in it. Finally, I think we can safely say that Dr Martin Luther King “appeared” to believe in god. So, slice it as you will, Coulter finds herself inventing new ways in which to be wrong.

As it goes on, the book begins to seem more like typing than writing, and its demonstration of the relationship between poor language and crude ideas becomes more overt:

Assuming you aren’t a fetus, the Left’s most dangerous belief is their adoration of violent criminals.

Well, as I try to teach my students, if you write that “as a young man, my grandmother used to read to me”, you slightly insult your grandmother by stating that she used to be a young man. It’s not that hard to make the assumption Coulter demands here – that you are neither the Left nor a fetus – but the dangler is complemented in the same sentence by an inability to associate a singular Left with its supposed adoration of violent criminals. Some right-wingers has a marked tendency to make this mistake.

Shall I be fair? Coulter was trained as a lawyer, and she does have an understanding of the rules of evidence. There is one quite strong passage where she exposes, with some forensic wit, the bogus claims made by the conceited Joseph Wilson about his dealings with Niger. Just for once, she mostly lets the record speak for itself, and thus allows the indictment of those liberals who fell for Wilson to occur, as it were, naturally. With the help of some (generously acknowledged) right-wing clippings-services and quote-providers, she has no difficulty in highlighting various jaw-dropping remarks made by feminists, ‘pro-choice’ types, Hollywood narcissists and the more Malthusian ‘environmentalist’ faction. She re-opens the case of Willie Horton, the exploitation of whose story has become a fetish among liberals, and forces the reader to reconsider. If it matters, I am with her on the tepid climate of moral and political relativism which, while it wants all children to do equally well at exam time, also regards the United States as no worse than the Taliban and thus, by an unspoken logic, as no better. But a polemic against this mentality cannot really be written by a McCarthyite.

The closing chapters are lifted from the brief submitted by the absurdly-named ‘intelligent design’ school to a recent trial in the town of Dover, Pennsylvania. Not so long ago, when the voice of liberalism was muted, the ‘Creationists’ – to give them their correct name – sought to forbid the teaching of evolution. Now that they no longer feel confident enough to impose themselves in this manner, they have fallen back on a spurious ‘equal time’ plea, whining that pseudo-science should be taught, in the name of ‘fairness’, alongside the real thing. In the Pennsylvania case, as in other recent trials in Ohio and Kansas, not only were the Creationist members of the school board thrown out by voters, but it was decided by the courts that the proposed teaching of ‘intelligent design’ was (a) a violation of the United States Constitution; and (b) a fraudulent waste of time for both teachers and judges. (By the way, it seems to me that these outcomes ought to alter the picture, beloved by so many European liberals, of the United States as a wasteland of fundamentalist knuckle-draggers). Coulter, the super-patriot and flag-waver, is a true reactionary in that she yearns for the time when the keyword of her title, as in ‘Godless Communism’, was a mantra for the simple-minded. In a world where the true enemies of civilization are much, much more godly than the blonde goddess of the hard Right, Coulter is reduced to a blitzing of soft civilian targets – one redeemed only by its built-in tendency to fall so wide of the mark.
Christopher Hitchens is a columnist for Vanity Fair.